I was asked to paint a banner for general school use, but to have it done this week so it could be used during the graduation ceremony on Friday.  School staff looked into having a vinyl banner professionally printed, but several factors weighed in to the decision for me to have a try with it.

The property director had buckets of paint with the school logo’s colors, plus a huge 12 x 27 foot wall hanging that had been painted with a (very large) young woman’s face, floating clock faces, and swirling stars against an ethereal background.  The tag on the back said “LVAA – ‘Night Songs.’”  I don’t know what it was used for, or when, but the property director—who also works for LVAA—has been using it as a drop cloth and furniture cover.

I cut/ripped off a 5 x 20’ strip to paint.  First I primed it in blue, then used a builder’s angle and chalk to mark off lines on the fabric, then used an overhead projector to draw the images and lettering, then used a combination of house paint and tube acrylics to start filling it in.

I was going to add some colored stars, but Kim thinks I should stop here, so next I need to touch up the primer to hid chalk and scuff marks, and use fabric glue to hem it.  Last will come a few grommets.

I just hope I can take that duct tape off the wall without ruining the wall paint.

I knew this would take a lot of time, but the amount of time vs. the complexity of the design is a little …well, dispiriting?  It’s the size of the thing that has really gobbled my time.  I can’t claim to be much of a sign painter or a graphic design person, so all the effort to get lettering straight and make things look somewhat clear and “polished” isn’t what I’d call second nature.  Plus, in this age of digital design, using house paint and an overhead projector on a huge piece of taped-up third-hand fabric feels a little barbaric.  It’s funny, though: when I have a paint brush in my hand and some paint to slop around, I feel pretty content.  I can’t help but wonder how it would feel to work on a landscape this size.  Well, OK, maybe I’d prefer about ¼ this size. 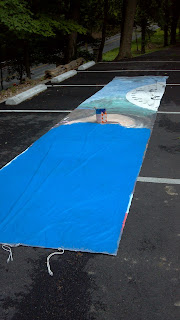 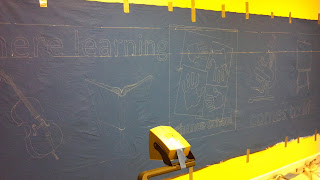 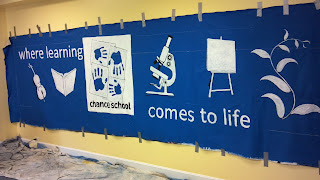 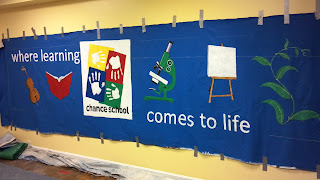 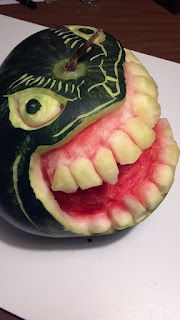 Here's my most recent, completed a few days ago.  It's black walnut ink on Bristol paper, 11 x 15 inches. 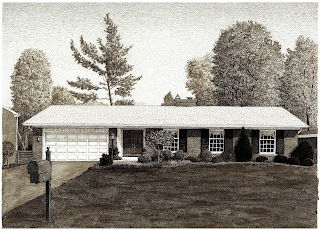 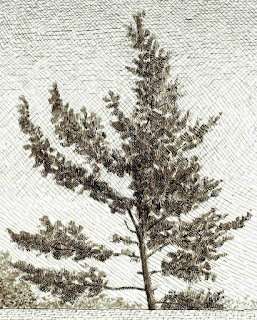 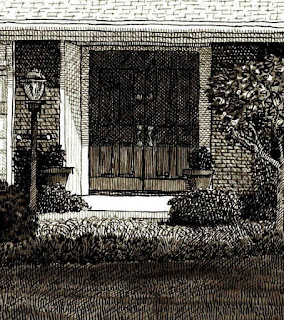 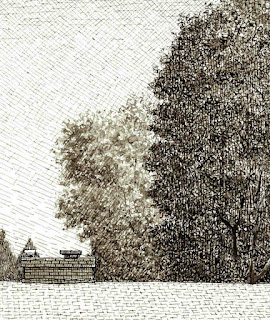 It made me want to draw more trees. I totally dig trees.