I'm trying to remember how I got involved in pen-and-ink drawing.  It wasn't a very deliberate thing, and just enough time has passed that I'm on the verge of forgetting.
Of course, I've always used ink to some degree, for sketches and doodles.  However, I wasn't ever really what I would call a pen-and-ink artist until about four years ago.  I drew mostly with graphite, and preferred to paint with oils.

I think this is how it happened:

In the spring of 2007, the office I work for changed locations, and our new building has behind it a wooded area with a walking trail.  That summer, on the walking trail, I found some fallen, immature green walnuts.


I didn't know what they were, and identification was difficult because they were still small.  They didn't yet look like ripe walnuts.  After some research and discussion, I figured out they were black walnuts, and learned that the wooded area had a bunch of black walnut trees.

I think that somewhere along the way while I was researching this, I saw that black walnuts could be used to make ink.  That prompted me to do a little more internet research on the process.  I read that the ink was good artist ink, lightfast, and archival.  The recipe for homemade black walnut ink was pretty straightforward.  Since at the time I had no cash for art supplies and I'm a cheapskate at heart, I thought I'd try it.

I do recall being a little bit preoccupied with it.  I learned to identify walnut trees and started spotting them all around town.  In the autumn, when the nuts fell from the trees, I picked up a bunch and made some ink.

During this time period, I was occasionally spending my lunch breaks doing graphite (and occasionally charcoal) sketches of buildings and trees near my office.  I was also, from time to time, doing quick sketches of people with black ink felt-tip pens, mainly because I enjoyed the crisp, clean contrast as opposed to graphite.

Late in the spring 2008, I took some walnut ink with me on my lunch break, and began a small drawing of the old Bellevoir mansion near my office.  I spent a couple of days on it.

In July, co-worker saw that drawing, and asked me to draw his house.  A friend of mine saw the Bellevoir drawing and bought it.  The house drawing I did for the co-worked led to a few more commissions from the co-worker's friends.  That, in turn, led to more commissions over the course of the next couple years.

I was taking these drawings to a gallery frame shop to have window mats cut for them.  The owner of the frame shop expressed interest in my work and recommended that I draw some local scenes to try to sell.

As I worked on these commissions, I developed a deeper appreciation for, and enjoyment of, pen-and-ink. 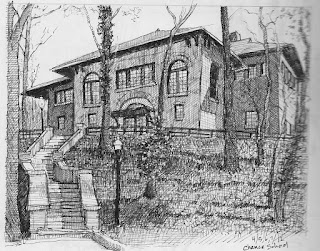 Here's a preliminary sketch I just did; I think I'll do the larger version in black walnut ink.  I'm working out how to leave in a lot of trees, which I like, without obscuring too much of the front of the building.  I particularly like the steps at this angle.
Posted by Mark at 4/08/2012 10:58:00 PM No comments: